Are you interested in finding out about West Bay’s history? Then please read on. Best make yourself a hot drink and find a comfy chair before you begin, you have a lot of years to get through…

Thanks to the author of the westbay.co.uk website. Much of the information was gathered from it, as well as a couple of the vintage photos. If this post leaves you wanting more then just go to that website where you will definitely find a lot more. A labour of love I think.

I have highlighted all the buildings which are still around in BOLD so that next time you wander about the harbour with other people you can make yourself look extremely knowledgable and clever by pointing out the landmarks whilst you impart a little bit of their history!

Are you sitting comfortably? Then we’ll begin. Just click here:  The history of West Bay

A while ago I tried to draw online a seagull to sit on the lifebuoy “o” in the “West Bay Cottage” logo at the top of the website. It wasn’t as easy as you might think. After quite some effort I was rather proud of my bird. I’d look fondly at him whilst pottering around on the website. There he was, squawking away happily.

But oh, the abuse the poor thing got from friends. “What’s that?” “It looks like a dinosaur.” “A pigeon?” “Why hasn’t it got any wings?” etc. etc. The fact I’d actually traced online a photo of a real West Bay seagull didn’t appease anyone one bit. Even my husband, who knows better than to criticise such things, said he “wasn’t sure about the seagull”. Obviously a seagull only a mother could love.

So, ta-dah, welcome to our brand new seagull. The old squawking one is no more. I showed my husband. “Nice…. I miss the old one”.  So do I, so do I.

What better way to cheer up a cold grey day than a slice of Dorset apple cake with, if you like, a dollop of thick cream or custard? Most apple growing counties make some kind of apple cake but the one from Dorset has become the most well-known. It’s a regular in local bakeries and cafés and won a competition to be named the county’s ‘National Dish’ in 2006, held as part of Dorset Food Week that year. 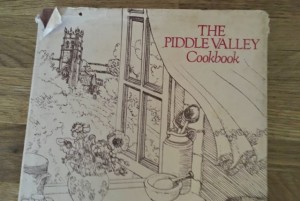 To use up some leftover cooking apples I decided to bake a Dorset apple cake. What better cookery book to turn to than The Piddle Valley Cookbook, full of “the favourite recipes of the people of the Piddle Valley”? My mum bought it years ago when we lived in Dorset near the valley. That’s her notes in the margin. It’s now a bit dog-eared and you can find it, back in Dorset, in our West Bay cottage. 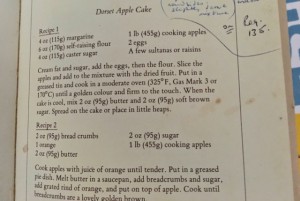 It has two recipes for Dorset apple cake. The first one looks a little plain. It uses margarine rather than butter which I expect is a sign of its time as the book was published back in 1978. The second recipe isn’t a traditional cake mix at all with no sponge but a bread-crumb, orange, butter and sugar crumble on top of stewed apples.

Interesting, but not what I was envisioning for my Dorset apple cake.

I turned my attention to the internet to find a recipe. Oh my, there are so many different variations. Cinnamon, sultanas or lemon? Wholemeal, plain or self-raising? Mary Berry, Waitrose or BBC Good Food?

A couple of years ago the Guardian newspaper carried an article on “How to cook the perfect Dorset apple cake”. The writer used a variety of recipes and experimentation to come up with her own ‘perfect’ apple cake recipe. But does this make it authentic? 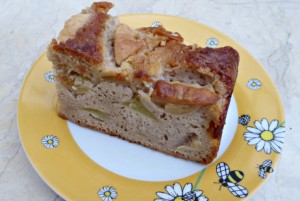 The writer in this article liked best the cake made by Bridport’s Leakers Bakery. He even interviewed the baker but sadly she wasn’t giving away her recipe “handed down and tweaked” since 1914. The photo here is taken from the article and is a slice of the praised Leakers Bakery cake.

The recipe from the Dorset Foodie Family blog looks a good one. The post has a reader’s gallery of Dorset apple cake photos too. 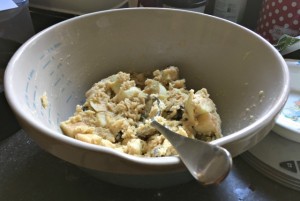 I ended up plumping for this recipe, “Greg’s Dorset apple cake“. It’s the one which won the 2006 competition and includes sultanas and lemon but no spices. Here’s a photo, work in progress.

Yum. That’s it in the top image. We’d already had a few warm slices before I thought of taking a photo which, to be frank, wouldn’t win any food blogger prizes. Why didn’t I move the oven glove and put it on a nice plate? Anyway, very nice and lemony, and not a bit like the one I had just before Christmas in the Watch House Café on the beach in West Bay.

So it seems there is no definitive recipe. As long as the ingredients include apples with brown sugar sprinkled on top, then yup, you can call it Dorset apple cake. Do you have a favourite apple cake recipe? If so please share it here by leaving a reply. As for me, that’s enough typing, I’m heading off to the kitchen while there’s still a small slice left. Best eaten fresh – what a drag 🙂

If you’ve read this and now fancy a holiday where you can eat Dorset apple cake in lots of the local cafés and tea rooms (and who wouldn’t) we’d love to welcome you to West Bay Cottage! Please take a look inside the cottage or head to our Enquire and Book page for availability, the rates and how to book.

Nowadays the iconic image of West Bay’s East Cliff has become synonymous with the hit TV series Broadchurch. But what other television programmes were filmed locally, before the days of Broadchurch? It turns out there have been several television crews in West Bay and West Dorset over the years. Here’s a quick round-up. 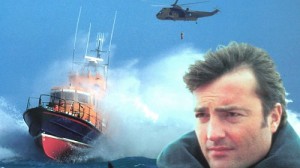 Do you remember another drama series which gave West Bay a little bit of fame for a while? The short-lived BBC series Harbour Lights ran from 1999 to 2000. It’s main character was harbour master Mike Nicholls (Nick Berry) with police officer Melanie Rush (Tina Hobley) and the money grabbing villain Tony Simpson (Gerard Horan). The harbour, with its characteristic kiosks, fishing boats, pubs and restaurants, was often visible. During filming Nick Berry was spotted in the local nightclub, DeVinchies, now the Spar supermarket on West Bay Road!

The Fall and Rise of Reginald Perrin 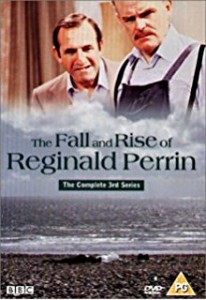 Going back a little further in time, the BBC series The Fall and Rise of Reginald Perrin (1976 – 1979) deserves a special mention. Reginald Perrin, played by Leonard Rossiter, runs into the sea in West Bay in the opening credits, having left all his clothes on East Beach.

The BBC made the classic series again in 2009, this time with Martin Clunes in the title role. However this remake used Worthing beach instead of West Bay for that famous scene. I don’t know, the star being a local chap too! 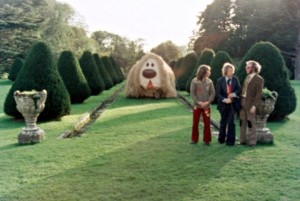 In 1975 The Goodies filmed a special called The Goodies Rule – OK. During the episode a huge Dougal, the dog from The Magic Roundabout, charges up behind them. As Graeme Garden tries to ride the giant animal, and Tim Brooke-Taylor is run over it, Bill Oddie grapples with an enormous Zebedee from the same programme. The trio guide Dougal and Zebedee back to a country house. This scene was filmed at Parnham House near Beaminster. Sadly this sixteenth-century house was gutted last year in a huge fire. Arson was suspected. The police concluded their investigations after the owner was found dead in Switzerland a few months later.

Another episode, The Goodies and the Beanstalk (1973), filmed scenes on Portland and in Dorchester. 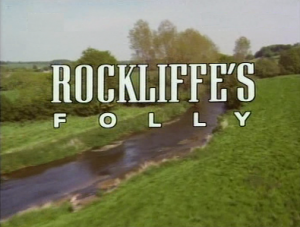 The short-lived BBC police serial Rockliffe’s Folly (1988) was a spin off from the popular London-based series Rockliffe’s Babies. A fed-up Scotland Yard detective played by Ian Hogg moved to the provinces for a change of pace. He transferred to the Wessex Police Force, finding the country has plenty of crime problems of its own. Weymouth portrayed the central setting of “Maidenport” and the police station seen was Dorchester’s. The series used Bridport for town scenes, along with the surrounding countryside. 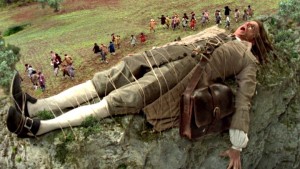 In 1996 the mini-series Gulliver’s Travels  was filmed along the Jurassic coast. It had a star-studded cast including Ted Danson and Omar Sharif. The series won five Emmy Awards. 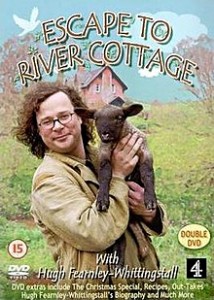 Hugh Fearnley-Whittingstall’s popular River Cottage series on Channel 4 was originally filmed near Bridport. In the first series, Escape to River Cottage (1999), Hugh left London to pursue an ambition of self-sufficiency, growing his own vegetables and raising his own animals at a gamekeeper’s cottage near Netherbury. In 2004 Hugh set up a new business from old dairy buildings near Broadoak, Bridport. This was shown in the series Beyond River Cottage.

Hugh is an enthusiastic fan of the local countryside and the series captured Dorset’s rural charm. Episodes were shot all around the county, ranging from cooking sea bass on the beach with local fisherman to selling produce at the farmer’s markets.

Hugh was off again in 2006, this time moving River Cottage HQ to a bigger site in East Devon. 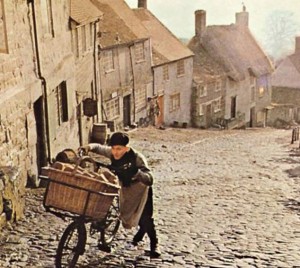 In the 1970s Formula One driver Jackie Stewart made a Goodyear tyre advertisement where he raced down the old West Pier in West Bay and slammed on the brakes at the end. He insisted on boats being positioned in the water in case he skidded and overshot the pier. The pier has since been demolished and replaced by the Jurassic Pier.

A bit further afield, Gold Hill in Shaftesbury became famous when it featured in the Hovis advert in 1973. It was directed by Ridley Scott and has been voted Britain’s favourite advertisement of all time. Is that tune playing in your head?

I wonder how many of these TV programmes and adverts you have seen? Do you remember spotting any of the local sights? If you know of other TV series with scenes around West Dorset please leave a reply and let me know.

If you’ve read this and fancy a holiday in the area too we’d love to welcome you to West Bay Cottage. Please take a look inside the cottage or head to our Enquire and Book page for availability, the rates and how to book.