A couple of days between cottage bookings gave me the chance to go and stay there myself earlier in the week. And it was hot, hot, hot. I spend a lot of my time outdoors giving the back garden a bit of a spruce up. Jet washing was a very messy business, I think I got myself as wet as the backyard. Then a bit of chopping back some invading shrubs. Plus a quick battle with the garden mint. It seems to be on a mission to take over the whole patch. I also added a couple of new plants, sadly accidentally unearthing some spring bulbs in the process.

Each visit I’m on my hands and knees pulling up weeds growing between the paving in the back and through the gravel in the front. And next time, oh look, more weeds. But I can’t put weedkiller down. We have hedgehogs visiting the Row quite often and in late summer lots of butterflies are attracted by the windfall apples in the front garden. Well, as Eeyore said, weeds are flowers too, once you get to know them. 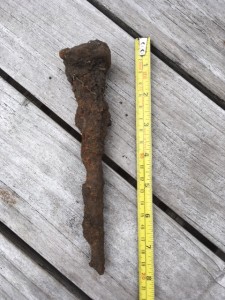 When digging a hole for a new plant I found the biggest nail I’ve ever seen. It is almost 20cm long, very rusty and looks old. Martin said that once upon a time it would have held down the decking on a wooden boat. In the 19th century West Bay, then called Bridport Harbour, was an important centre for shipbuilding. The largest vessel ever built in the shipyard weighed 1,460 tons and was over 60m long. I wonder what size boat this nail came from?

The seaside was lovely in the late afternoon. I watched people paddling in the sea at West Beach while I savoured my reward (for all that hard work gardening) of a Baboo Gelato ice-cream. Followed by a Cornish pasty from the bakery. Perhaps not the conventional order to eat them in. That’s one of the good things of being somewhere on your own, you can do whatever you want whenever you want!

If you are staying in the cottage help yourself to the mint and rosemary. If you notice any of the plants looking parched please do water them. Why is it that the plants you want to keep need TLC whilst the weeds seem to thrive on neglect?