I’ve just spent a nice long weekend at our cottage and thought I’d write a little about it here. I’m surprised it’s been so long since my last post. At this rate it will be an annual event. So here’s what’s been going on with West Bay Cottage this year.

The start of 2021 coincided with another lockdown which meant our first visit to the cottage wasn’t until April. We finally took down the Christmas decorations.

In May I had a solo trip to do a bit of painting. In the cottage, not landscapes. After much deliberation I repainted the kitchen cupboards exactly the same colour that they had always been. Afterwards I treated the kitchen to a new toaster and myself to a G&T.

A visit in early June we walked along the cliff path to The Anchor Inn in Seatown for lunch. It was so unexpectedly hot we got quite sunburnt on the walk. The pub is in such a nice spot with great sea views from the terraces. Walking back we wondered why all the cows stand so near to the cliff edge.

Later in June we bravely left our teenage daughter and a group of her friends home alone in the cottage for a few days. I’m glad to say that they, and the cottage, were all in one piece when we returned. Watch this and you’ll see why that’s quite lucky!

On to August and we spent a whole week in West Bay. Apart from going out on a paddleboard a couple of times, the main excitement was the replacement of the front door. The new door looks just like the old one, it has to as the cottage is Grade II listed. Unlike the old one it isn’t full of wood filler. Funnily enough I returned last week to find that Henry, aged 11, had written in the kid’s guest book this summer (big thank  you to Henry for his effort) and had a lot to say about the new door. Brute force and and a run up required to shut it!? We were warned that the new draught excluder strip would take a while to compress but it isn’t very hard to close, honestly!

I spent last weekend at the cottage with my friends from college days. See this post for a write up of a similar weekend a few years ago. As ever, it involved lots of food and drink, and a little exercise too. On Saturday we walked the cliff path west before heading inland after Eype to have lunch at Downhouse Farm Garden Café. I forgot to take my phone so no photos but it was very pleasant and the walk means you feel you’ve earned your lunch, and the walk back means you deserve an ice cream from the Baboo Gelato kiosk too. That evening we had a takeaway from S&E fish and chips, it’s practically a tradition. On Sunday we went to the friendly Seagulls Restaurant for a good roast dinner, and couldn’t resist their yummy bread and butter pudding too. Book ahead.

I pottered about for a few days at the start of the week. West Bay was still busy but not as busy as I’d half expected, but of course schools are back now. One interesting sight was this big old ship in the harbour on Tuesday, called the Lydia Eva. It turns out it is quite a historic vessel, see here. Delving a little more I found out it was on its way to Lyme to appear in a Hollywood movie tracing the early life of Roald Dahl’s Willy Wonka. It’s going to play the passenger steamer that brings Willy to England. See this link.

Continuing my stroll around the harbour I noticed that the catch from the Top Cat catamaran was being unloaded. I peered to see what they had caught. The crate contained something that looked like it came out of John Hurt’s stomach in the film Alien! Definitely something it’s best not to see until it’s served up on a plate. 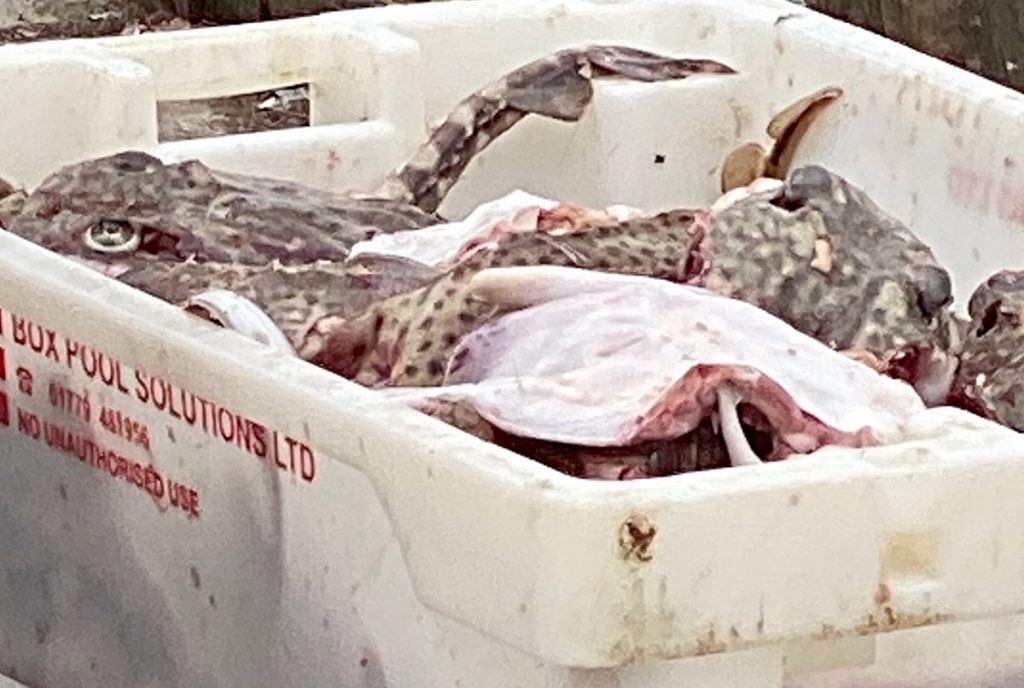 Well that’s enough for now, thanks for reading 🙂