One of the many reasons to have a holiday in West Dorset is the quality of its food and drink, it’s become quite a haven for food lovers. Bridport has a reputation for being West Dorset’s foodie capital. Have a look at this video for a taster.

Read on for some suggestions of delicious independent restaurants, cafés, pubs and local suppliers. 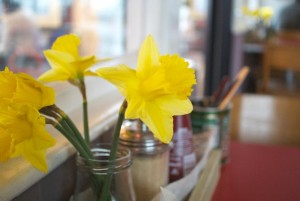 Within a few minutes’ stroll of the cottage you’ll find several restaurants and cafés, three pubs, a tea room, plus the wooden food huts around the harbour. Locally caught seafood is often a speciality. Here are some of our favourites.

The Watch House Café is right on East Beach. Go there for breakfasts, wood-fired pizzas, and a changing menu with fish dishes. 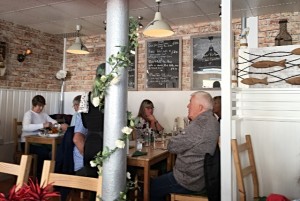 Seagulls, round the corner on Station Road, is a reasonable priced restaurant with friendly staff and well cooked food. Several people have written in our guestbook recommending the place, and it is rated highly on Tripadvisor. A recent visit for Sunday roast and pudding did not disappoint! 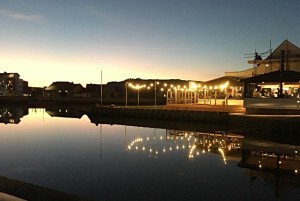 Go just around the corner on George Street and over the river footbridge for Rise Cafe Bar.  It’s West Bay’s newest restaurant in the premises which was the Riverside for decades. The new owners are the couple who put “boutique” into The Bull Hotel in Bridport and founded The Stable there (see below). They also own Swim in Lyme Regis. With the new interior, outside decking and festoon lighting it definitely makes more of its unique position. Serving breakfast, lunch and dinner, as well as drinks and small bites. Lots of variety on the menu, including burgers, fish dishes and children’s meals. 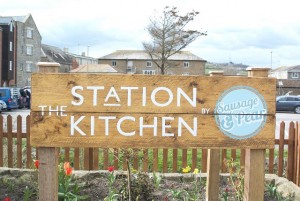 If you fancy something a bit quirky and unique then head to West Bay’s old station platform. Here you can dine well and enjoy cocktails in The Station Kitchen’s vintage railway carriage. During the day the Ticket Office is serving light lunches, cakes and drinks which you can eat outside or take away to East Beach.

Sladers Yard’s old warehouse provides a gorgeous rustic backdrop for breakfast, lunch, or cake and coffee, with vegan and vegetarian wholefood options available, all made in the café. Follow your food with a nose around the beautiful furniture and paintings there.

On a nice day the harbour is the perfect place to sit and eat alfresco.

You’ll probably need to queue for the freshly cooked fish and chips from S & E Fish and Chips, but it’s worth the wait.

Or you could try one of the characteristic wooden huts providing a variety of foods. Special mention to Rachel’s on The Mound which does great fish dishes including a tasty chowder, and Baboo Gelato which sells ice cream handmade in Bridport. Yummy. Just keep a look out for the seagulls. 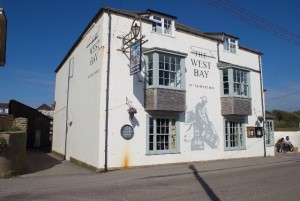 The three pubs in West Bay are all Palmers pubs, Bridport’s brewery.

For years our choice for a Sunday Lunch in West Bay has been The West Bay. With new people at the helm (late 2018) the jury is still out but they promise to highlight West Bay seafood dishes.

You can sit in the beer garden of The George and watch harbour life as you enjoy a pint of the local brew. Good value pub grub too.

The thatched Bridport Arms on East Beach was built around the turn of the 18th century, making it the oldest surviving building in West Bay. 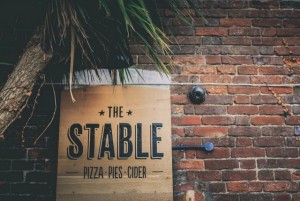 In Bridport you have a choice of cafes, restaurants and bars serving locally produced food and drink. We haven’t tried them all but one of our favourites is the welcoming Soulshine Café on South Street. Order a freshly pressed juice, smoothie or coffee while you mull over the breakfast or lunch menu. Bread is baked fresh every morning.

Another favourite is the original The Stable, a pizza, pie and craft cider place in a restored barn behind The Bull on East Street. 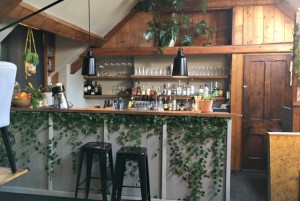 A place we’ve just discovered is Dorshi, tucked down a little alleyway, Chancery Lane, off East Street. The style is Asian using mostly local produce. The menu has a selection of dumplings, small plates and noodle bowls. Eat separately or share plates in a group. We were too busy tucking in to the food to think of taking a photo of it. Instead here is one of the upstairs bar where they make cocktails in the evening.

We recommend Bella’s on Bucky Doo Square for a sandwich and slice of cake too. 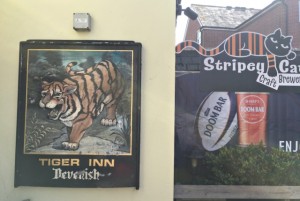 A welcoming pub is the Tiger Inn. It’s close to the town centre on Barrack Street, which runs north off East Street. The pub is traditional with a nice atmosphere. Popular with locals, it is friendly to non-locals too. It has pleasant courtyard seating at the front and back of the pub. There is a good selection of real ale (and it’s not Palmers for a change).

For a change from a pint head to The Bull’s cocktail bar, The Venner, tucked away behind a secret door at the end of the ballroom. Another cocktail bar, Dark Bear  and was a runner up in the Observer Food Monthly Awards 2018 for best places to drink. It takes over the Aroma Café on East Street on Wednesday through to Saturday evenings. A joint venture by Dorset’s two leading mixologists, they specialise in workshops, local flavours and house-made infusions and syrups.

Fancy a takeaway? You have various options, including Long’s Fish and Chips, Indian, Chinese and Domino’s pizza. 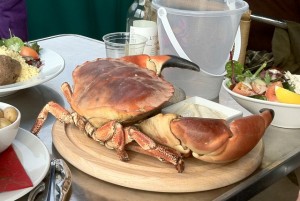 Big sister of West Bay’s Watch House Café, The Hive Beach Café is located right on the beach at Burton Bradstock with far reaching views across Lyme Bay and Chesil Beach. It’s short drive or you can get there walking along the cliff path west from West Bay. It’s a brilliant location to enjoy fresh, local seafood, homemade cakes or just a cup of tea.

Also in Burton Bradstock you’ll also find The Seaside Boarding House with  restaurant and bar. It has an open air terrace overlooking Lyme Bay. Menus have a local seafood bias, and you can pop in for breakfast or afternoon tea too. We’ve not been there ourselves yet but a cliff walk from the cottage for a cream tea is definitely on the to-do list, and deserved after that East Cliff climb. 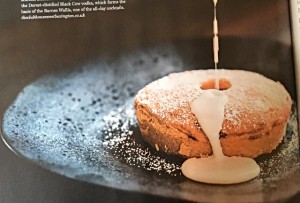 In 2017 the Hive Beach Company turned it’s attention to another venue a little further down the coast in West Bexington. Taking on the slightly shabby cafe on the beach there, they have transformed it into The Club House. Already awarded an AA Rosette for culinary excellence, a Western Daily Press review (April 2018) describes it as “a genuinely exciting discovery.” It’s a new entry in The Good Food Guide 2019. 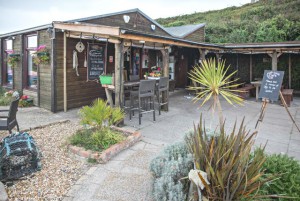 The Crab House Café, with a beach shack feel, serves fish and seafood landed along the coast within 40 miles, including oysters from their own beds. Roughly 40 minutes drive from the cottage, it’s at the eastern end of Chesil Beach at the entrance to the Portland causeway. Sun hats provided! Book ahead. 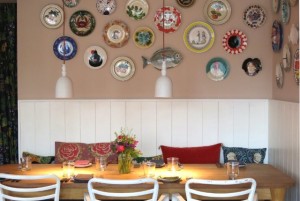 Brassica has a lovely location in Beaminster’s historic market square. It features on Sunday Times’ Top 100 Restaurants list. Excellent reviews describe a cheerful dining room and food as delicious, interesting and local, with a Mediterranean influence. The menu changes daily with a choice of five starters, five mains and five desserts.

We’ve never been there ourselves but The Ollerod, also in Bedminster, looks lovely and has a walled garden and a covered and heated terrace. 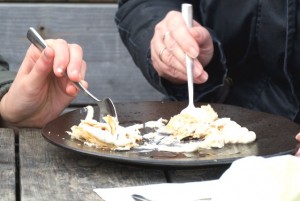 Walk west along the Coast Path and visit The Anchor at Seatown right on the coast. Carry your drink up to the terrace at the side of the pub to sit and sip with one of the best beer garden views in the country. It has been winning lots of awards recently. VisitEngland named it England’s finest pub. It also won Dorset’s best pub in the National Pub and Bar Awards in 2017 and 2018 and Dorset Magazine awarded it best pub of the year 2017 too. 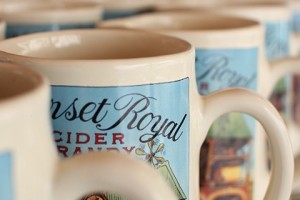 If you fancy pushing the boat out (not literally) in Lyme Regis, eat at Mark Hix Oyster and Fish House, with panoramic views over the bay. (Update July 2020 – Permanently shut at the moment but may reopen soon says this article.)

An interesting choice is The Avenue Restaurant based at Weymouth College. Mark Hix works with the college, supporting the full-time students who cover all tasks in the kitchen and front of house. Book a table if you are after top quality food at a very good value. The restaurant is only open certain days during term time, check the website. 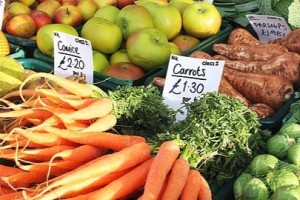 Discover freshness and flavour, support the local economy and cut food miles by using local produce. Farm shops abound in the winding lanes of the county. The nearest is Washingpool Farm, just outside Bridport, with over 80 acres of working farmland. Their farm shop sells their own vegetables, meats, and ready meals plus a large selection of food and drink from local suppliers. You may recognise it as Lenny Henry’s farm shop in Broadchurch season 3.

Farmers’ Markets are a great place to buy local produce and chat with farmers, producers and growers. Local farmers’ markets are held in Bridport (second Saturday of the month), Dorchester (fourth Saturday) and Poundbury (first Saturday).

Bridport has the oldest family-run business in English, established in 1515, the butchers RJ Balson & Son.

With boats landing every day, fish is fresh and local at Samways Fishmongers, round the corner in West Bay. Get there in the morning before they sell out.

Palmers Brewery, on the left as you drive from West Bay into Bridport, has a shop, Palmers Wine Store, selling wine and their bottled ale. 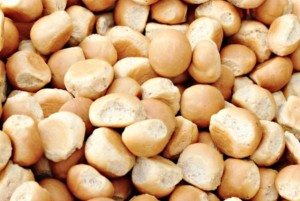 When you are in Dorset try a Dorset Knob, a dry biscuit usually eaten with cheese. Moores Biscuits make them, a company based in Bridport and established over 130 years ago. Their Craft Bakery Shop in Morcombelake also has an art gallery. 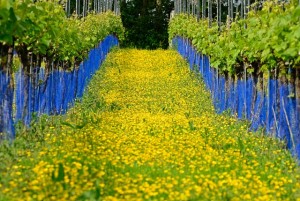 Less than 20 minutes drive beyond Bridport is Furleigh Estate, a prize winning vineyard and winery. If you’d like to try some English wine you can book a vineyard tour and tasting with them.

Black Cow vodka is the latest local product to win UK plaudits and awards. A Beaminster dairy farmer makes the vodka from grass-fed cows’ milk from his own 250-strong herd. A great bit of diversification. You can visit the vodka distillery at Childhay Manor Farm near Beaminster. Choose between the Black Cow Distillery Experience, which includes a four course meal, or the Black Cow Distillery Tour. For details, times and dates and to book (you can’t just turn up) click here. 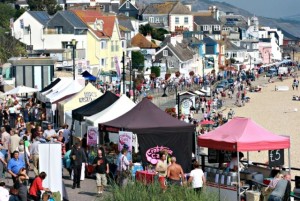 Keep an eye out for food festivals across the county. Pick up tips as you watch demonstrations by chefs and experts. Local festivals include the Spring Tide Food Festival at Hive Beach in May, Bridport Food Festival in June and Mark Hix’s Food Rocks festival in Lyme Regis in early September.

Taste some of the UK’s best fish and shellfish at the Dorset Seafood Festival in July. It’s the largest free seafood festival in the country with 100 food stalls lining Weymouth Harbour.

Have you eaten out somewhere fantastic? We’d love to hear from you Contact us