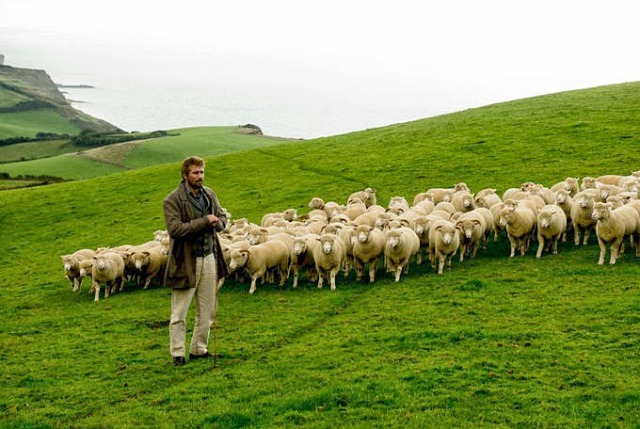 When I read that this summer’s blockbuster film Dunkirk has some scenes filmed in Weymouth it prompted me to look into what other films have West Dorset locations. Filmmakers have been drawn to West Dorset over the years by the unspoilt countryside, coast, picturesque villages and historic houses. Notably the area is the backdrop for several period dramas, in particular adaptations of Thomas Hardy’s novels where the scenery is as integral to the story as the plot and the characters.

There’s too many films for just one post so I’ll split them over a few, grouped by locations in West Dorset. First up, movies with scenes set along the Jurassic Coast but not including Lyme Regis, Portland and Weymouth, they’ll need a separate post or two. Next time you watch one of these films see if you can spot the local sights. Or why not explore the beautiful local coastline by tracking down some of the film locations? 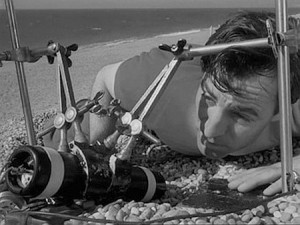 The British film-making team of Powell and Pressburger made The Small Back Room in 1949, a psychological drama. It’s famous for a rather gloomy look at the war effort and its twenty minute bomb-defusing finale. Michael Powell said he made the film specifically to use Chesil Bank as both a location and a story setting. Dorset’s now-vanished Abbotsbury Station appears in the film. You can also see St Catherine’s Chapel overlooking Portland and Chesil beach itself, where the bomb-defusing scene takes place. 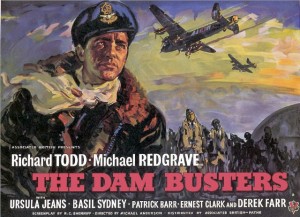 Despite local tourism claims, none of 1954’s The Dam Busters dramatic scenes were shot in Dorset. However “bouncing bomb” inventor Barnes Wallis acted as the film’s technical advisor and his own 1942 actual footage of test-drops of dummy bombs over the Fleet Lagoon was used throughout, including in the final raid scenes. The Fleet Lagoon thus ‘doubled’ for the real German dam-lakes in the final dams attack sequence. 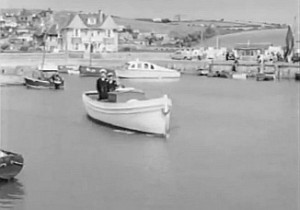 The Navy Lark, released in 1959, was filmed in and around West Bay. In it West Bay is a small fictitious channel island called Boonzey Island. Pier Terrace is the Naval Headquarters of the island. This was a spin off from a BBC radio comedy series about an incompetent crew of a Royal Navy ship. Similar to the ‘Carry On’ and ‘Doctor’ films, this black and white film’s stars included Cecil Parker, Leslie Phillips, Hattie Jacques and Gordon Jackson. 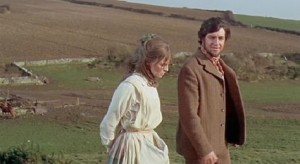 The original 1967 adaptation of Thomas Hardy’s Far from the Madding Crowd, starring Julie Christie, Alan Bates, Terence Stamp and Peter Finch, was directed by John Schlesinger with Nicolas Roeg as cinematographer. Twenty locations across two counties were used including the Tithe Barn in Abbotsbury where Bathsheba’s wedding dance is held. This barn, dating from the 1390’s, is the largest thatched building in the world. It is now home to Abbotsbury Children’s Farm. Cottages in Abbotsbury village form the backdrop when Troy disembarks from a cart on his wedding night. 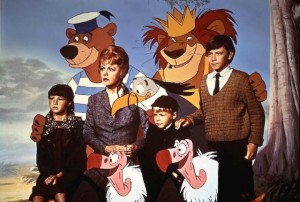 Disney’s Bedknobs And Broomsticks (1971) mixes animated characters into live-action settings, obviously aiming for the same success as the earlier Mary Poppins. It’s not set in Dorset but the script’s finale calls for a deserted area where an army of ghostly knights line up to oppose a German U-boat landing a raiding party. The ruined castle seen in these shots is clearly Corfe Castle. One scene is said to use the old railway station at West Bay. However the entire film was shot in Disney’s studios in California! Dorset backdrops were courtesy of plate shot technology, where a photograph is applied to a glass plate which is then positioned to appear as the actual background to a scene. 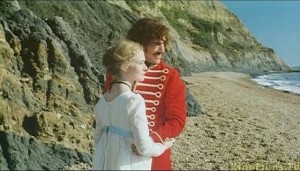 The Scarlet Tunic, a version of Hardy’s fact-based tragic short story of the Napoleonic Wars era entitled The Melancholy Hussar Of The German Legion, is an independent low-budget film made in 1998. Filmed at Chideock, Seatown and Bridport using a local crew, it was admired for its photography and scenery but generally reviews were poor and it received little distribution. 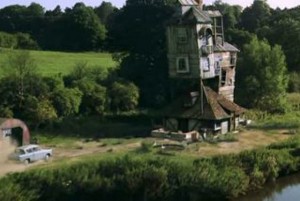 The swampy reed beds of the fleet lagoon near Abbotsbury Swannery were used as the entrance to the Weasley family home in Harry Potter and the Half-Blood Prince. The filming took place in 2007 in a huge field of reeds less than half a mile west of the Swannery with body doubles used instead of the principal actors. To create the studio set filmmakers harvested lots of reeds and moved them to Leavesden Studios for the shots where you can clearly see the actors. 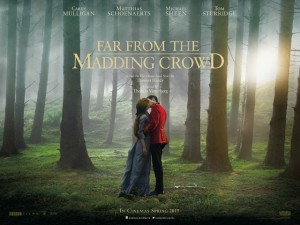 The most recent film version of Hardy’s Far from the Madding Crowd (2015) starring Carey Mulligan as Bathsheba Everdene was filmed in several locations around the county. West Dorset residents took part as extras on the film. The cliffs over which Gabriel Oak’s (Matthias Schoenaerts) sheep are driven by the out-of-control young sheepdog are just down the coast from West Bay at Eype (see top picture). 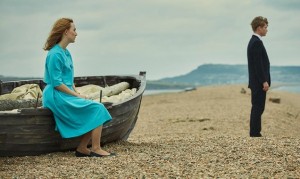 The film On Chesil Beach, adapted by Ian McEwan from his own book, is due to be released early 2018. It is set in the early 1960s and centres on a young couple who spend a fraught wedding night at a hotel there. It stars Saoirse Ronan and Billy Howle as the couple, with Samuel West and Emily Watson also in the cast. Principal photography began in October 2016 on Chesil Beach. There is no actual hotel there.

If you’ve read this and want to see some of the film locations for yourself but haven’t booked somewhere to stay we’d love to welcome you to West Bay Cottage. Take a look inside the cottage or head to our Enquire and Book page for availability, the rates and how to book. Or keep on reading. In the next post find out about some of the movies filmed inland in West Dorset, including those with scenes at Mapperton and Athelhampton House. Coming soon to a screen near you!

est Dorset’s unspoilt countryside, coast, picturesque villages and historic houses has made it an ideal location for many films, in particular various period dramas and especially adaptions of Hardy novels.