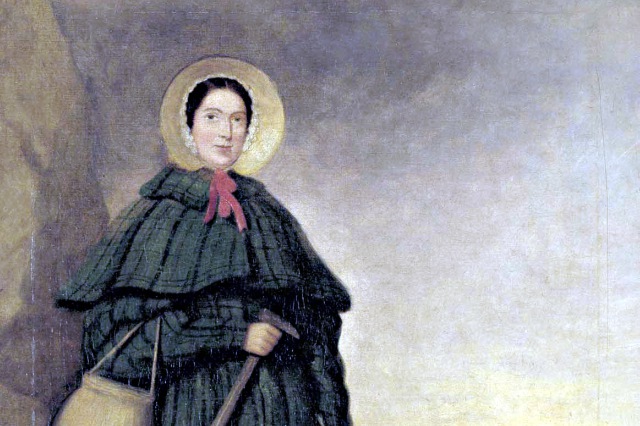 Mary Anning’s story is fascinating. Born in Lyme Regis in 1799, she lived her whole life there hunting, collecting and selling fossils. The Natural History Museum proclaimed her the greatest fossil hunter ever. Yet the scientific community didn’t completely accept her during her lifetime or give her as much credit as she deserved. Why? Because she was female, poor and working class. If you’d like to know more please read on. Are you lucky enough to be visiting Lyme soon? Find out about the town’s most remarkable person before you go. 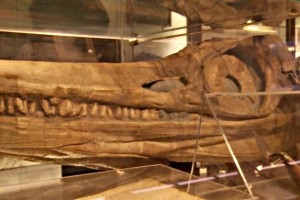 At fifteen months old Mary Anning survived a lightening strike which killed the three other people sheltering under the tree. Unlikely as it sounds her family maintained that the sickly baby girl became much smarter and livelier as a result.

As a young child she would often go out on the beaches of Lyme fossil hunting with her older brother Joseph and her father, a carpenter and an amateur fossil collector. The family was poor and selling the fossils was a necessity to bring in money. It was dangerous work particularly during the winter months, out in storms and after landslides. Her father died when she was only eleven, leaving the family in debt. Mary, along with her mother and brother, continued collecting and selling fossils to tourists from a table outside their house.

In 1811 Mary’s brother discovered a four foot long skull. With its long snout and prominent teeth it might have been a crocodile except that it had huge, bulbous eyes. A creature never seen alive. A few months later Mary found the rest of the skeleton. It became quite a sensation, rocking the scientific world. 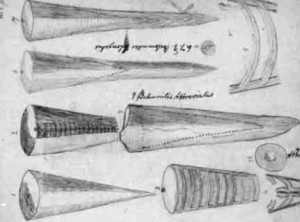 Mary eked out a living by finding, painstakingly recovering and selling fossils throughout her life. As she continued to make important fossil discoveries her reputation grew. Scientists and collectors from around Europe and America visited her in Lyme. However the majority of her finds ended up in museums and personal collections without giving her any credit.

Mary read scientific papers and dissected animals to gain a better understanding of anatomy. She became an expert in the delicate work of removing fossilised bones from the rocks, then reconstructing skeletons. She knew more about fossils and geology than most of the gentlemen geologists and stayed in frequent contact with them. They published information she gave them, but often neglected to mention her name.

Despite her incredible understanding of fossils and skeletons she was not eligible to join the Geological Society of London. Not surprisingly she grew resentful of the scientists who failed to acknowledge her work, remaining an outsider barred from full participation because of her sex and social class.

The dangers of her occupation was highlighted in October 1833 when her dog was killed by a landslide that nearly killed Mary too.

The Huge Importance Of Her Discoveries

Mary Anning’s fossil discoveries caused major controversy as they challenged the belief that the world had been created as described in the Bible. If God’s creation was perfection, how come these creatures no longer existed, so must have been imperfect? Those who had faith in Genesis as literal history required every species ever created to be alive still. They also believed that everything had been made within a week. Why were different types of fossils found in different layers of rocks, evidence that the animals had existed during different eras?

The spectacular marine reptiles that she unearthed provided evidence for extinction. This helped shake the scientific community into looking at different explanations for changes in the natural world. This indirectly lead Charles Darwin into his insights which culminated in his publication The Origin of Species in 1859. Darwin referred to her in his writings as the carpenter’s daughter, who deservedly “won a name for herself”.

In the last few years of her life, Mary became increasingly sick, suffering from breast cancer. She began taking laudanum for the pain and local people mistook the effects of the drug for drunkenness. When the Geological Society’s members learned of her plight, they started a fund that paid for her treatment. In 1846 they made her an honorary member of the society. She died in 1847. A eulogy was read at a society meeting and they published her obituary.

After her death her story attracted increasing general interest. In 1865 an article in a magazine edited by Charles Dickens celebrated her life and achievements.

Mary was probably the inspiration for the 1908 tongue twister, “She sells seashells by the seashore.”

In 2010 the Royal Society included Mary in a list of the ten British women who have most influenced the history of science. 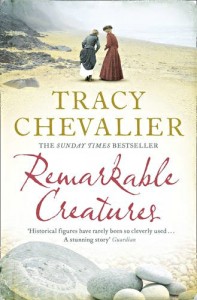 If you enjoy reading historical novels then Remarkable Creatures by Tracey Chevalier is a great way of finding out more. Like her most famous book, Girl with a Pearl Earring, Chevalier takes real historical events and people and winds a fictional tale around them.

In Remarkable Creatures two alternating voices tell Mary’s story. One is Mary, the other is Elizabeth Philpot, a middle-class spinster sent by a married brother from London to live more cheaply in Lyme. Elizabeth begins searching the beaches for fossils and meets Mary, then a child. Despite their differences in class and age a loyal friendship develops, founded on their shared passion for fossil hunting. As well as an absorbing story it is also a revealing portrait of female friendship. They, as much as the fossils, are the remarkable creatures of the title.

A production company optioned the book earlier this year and so, who knows, maybe a movie beckons.

When you are visiting Lyme the Lyme Regis Museum, on the site of Mary’s birthplace, has a Mary Anning wing which tells the story of Mary and Lyme’s fantastic fossils. They also offer guided Mary Anning and fossil walks. Click here to see if there are any scheduled conveniently for you. Incidentally the museum, built in 1901, was commissioned by Thomas Philpot, a relative of Elizabeth Philpot.

Mary Anning’s grave is in the churchyard of St Michael’s Parish Church. A stained glass window there, paid for by the Geological Society, commemorates her life.

Getting to Lyme Regis from the cottage is an easy drive down the A35. Alternatively you can take the Jurassic Coaster bus which goes from outside The George. You can even get a water taxi there from the harbour. Even if you aren’t interested in Lyme’s fossil history you’ll find plenty to see and amble around, and lots of places to have a bite to eat. I hope this potted history of Mary Anning’s life helps to enrich your visit a little. If you want to know more, Remarkable Creatures is well worth reading and particularly suited to a holiday on the Jurassic Coast!

Read this and want to visit the area? We’d love to welcome you to West Bay Cottage. Please take a look inside the cottage or head to our Enquire and Book page for availability, the rates and how to book.

Family Days Out In Dorset