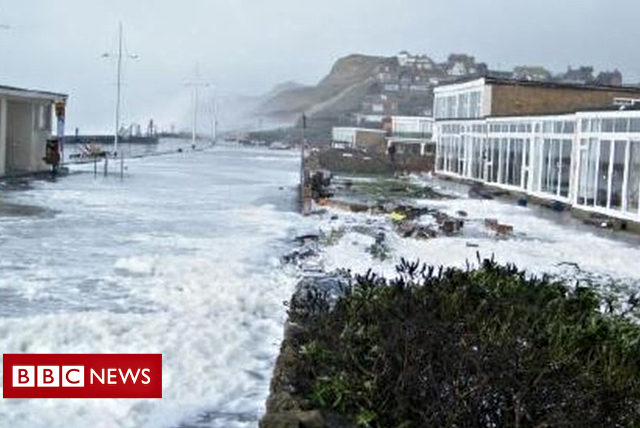 West Bay has a history of flooding. It is something we became aware of when we were buying our cottage and needed to set up home insurance. Since then we have had several anxious times after our phones have bleeped with a message from the Flood Information Service to tell us that there is a flood warning in place for the harbour and to expect flooding imminently. Fortunately every time it has been a false alarm. The worst we have known was one Friday evening back in 2014 when they even evacuated the flats behind The Esplanade (see picture above).  So good news when the Environment Agency teamed up with West Dorset District Council and agreed to install new sea defences at both beaches.

To find out more about the scheme please read here.

Unfortunately for West Bay residents and visitors it wasn’t feasible to do the construction work in the winter months, but the groups involved with the scheme reassured that they would do “everything practically possible to minimise public loss of enjoyment of West Bay’s wonderful beaches” and every effort would be taken “to minimise disruption, noise and dust”.  Hmm, the work is very much underway now and my cleaner has just told me that it is very difficult keeping on top of dust at the moment, cars look like they have been on a desert drive! She says it feels like an earthquake when they drop the rocks on the beach. It all sounds rather interesting if you like that sort of thing but we are very sorry if your holiday in West Bay isn’t quite as relaxing or dust-free as it usually would be.

The work is set to be complete in early July (and they have said they will stop until September even if it isn’t) apart from a couple of things. A new boardwalk at the far end of East Beach is being built in September to help accessibility and improvements are going to be made to the River Brit bank (the caravan park side) over the winter period.

Shop Around The Corner